Are you looking for that craft that you need but can't find anyone? Worry not! We feel you and you may find someone else capable of doing it right here!
Crafting Professions
https://legacyplayers.com/
Armory Link
Ass memes
https://www.youtube.com/watch?time_continue=16&v=MgGIXhGhNVUBy Kurayami 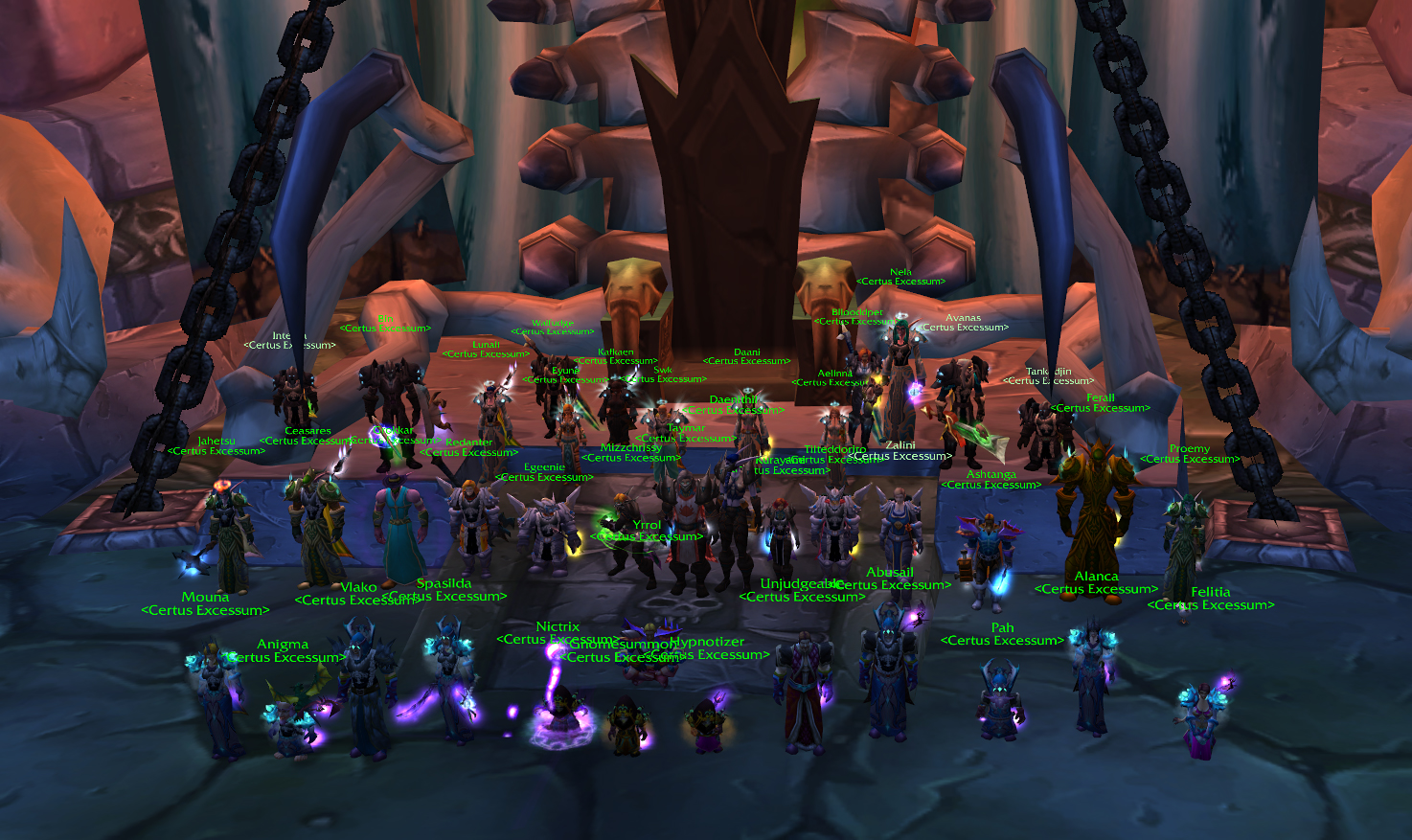 Welcome to the Certus Excessum website! Login or Apply to join!

Press "Apply!" in the upper right corner to begin. Fill the application as detailed as possible, remember that this is our first impression of you!

Applying to the Guild:

A link to your finished application will be sent to your e-mail.

Note: That only yourself and Certus Excessum-Staff will be able to see your application.

- KLHTreatMeter (known as KTM - keeps track on aggro)
- BigWigs VG (raid boss timers)
- CThunWarner (radius-checker)
- KTMod (CC for Kel'Thuzad)
- Anaron's WoW Mod (enables consumables/durability checking) --> To determine if mandatory
- Decursive (raid cleanse/dispelling - some classes only)
About Certus Excessum
Certus Excessum was formed in spring time 2017. The initial idea for the guild came as the biggest EU guild at the time stopped raiding. People from the past and different guilds rejoined and Certus Excessum was formed. Our goal is to be the best EU guild and clear the entire available content in vanilla World of Warcraft.

Loot System
DKP - Dragon kill points - designates a kind of currency which is earned by participating in endgame raids and in queue and spent by acquiring loot from endgame bosses. The term DKP is also frequently used to designate raid-level loot system in general. The most popular systems for endgame loot distribution are point-based (and thus DKP systems).

These points are awarded to each guild member as they attend a guild raid. The current DKP of each member reflects his or her priority for loot. When a member "wins" an item, they lose a DKP amount that reflects the value of that item.
DKP allows for an unbiased comparison between guild members when decisions about loot are to be made based on attendance and recent items that have been awarded.

Besides DKP, we enforce limits on how much DKP a rank can bid at one given time for an item.

These are the roof-limits each rank can bid up to and respectively lose priority against their fellow better.
Equal rank bids can raise as much as they wish.

Raids
Our main raid days are Sunday, Tuesday and Thursday @ 18:45 PM ST (Server Time).
That's when we aim to do either Naxxramas or Ahn'Qiraj Temple. Our Main focus is to clear Naxxramas, but we try to rotate the walkthrough sometimes so that players who can only raid X Y Z days experience all the content.

Rules, Goal & How-We-Approach
In the 2nd last week of January we decided to stop raiding AQ40 during our Official-Raiding-Schedule and devoted ourselves entirely to Naxxramas aiming to clear 14/15 on farm in 1day and a half leaving us with roughly 2 hours of Tuesday + 4 hours of Thursday room for the sake of progression.

All weeks to come will be testing grounds to what may happen during Official-Raid schedule.

We will skip giving the full details here, in the attempt to shorten this guild information post abit.
Full guild rules and procedures are naturally found in the member-only section.

All our raid groups start at 18:45 ST with priority-invites according to ranks.

If more people want to join the raid than we have room for, then we use an organized queue-list and on a regular basis call out the names of the people we want to get inside on TS3 while whispering them ingame.

Note: Any special case can be brought to whisper with appropriate CL if outside game contact.


Got what it takes? Meet the requirements and apply!